As you have probably heard from either Becky or myself at some point, the cooking situation in these Italian apartments is rather dismal.  Our entire (dys)functional kitchen is a literal closet (closing doors and the whole bit) with four-burner gas stove (one of which is completely dead, another that is so close to the wall of aforementioned closet that there is a giant burn in the wall from standard use; which only leaves two burners for any practical use).  Our fridge is smaller than the ones I had throughout my college dorm years - with a freezer that is nothing short of laughable.  Which brings me to the focal point of this recipe: our "oven".  Toaster oven, to be exact.  To its defense, it is slightly larger than the average countertop toaster oven.  I think we could bake an 10" pizza in there if we really wanted to.  Still, it's a friggin' toaster oven designed for making...erm...toast and such?

In spite of this culinarily-debilitating environment, we can honestly do most of the things we otherwise could in a more apt environment - we just need to get a little more creative at times.  Enter the toaster oven pumpkin pie.  Becky made some pumpkin ravioli for a group of friends this past weekend (it was supposed to be butternut squash ravioli but the stores were apparently fresh out this past weekend).  The best way to get fresh, authentic pumpkin flavor for anything is to use a  fresh, authentic pumpkin - which we were able to find (the last one in the store, even!) just in time for the dinner party.

As you are aware, pumpkins are generously-sized fruits.  This one was on the smaller side, ringing in at approximately 3 kg (~6.5 lbs) which is a lot more pumpkin than was necessary for 9 servings of ravioli.  With the leftover (a little less than half of the original pumpkin), I decided to make some pumpkin pie since we missed out on that during Thanksgiving.  I picked up some smaller aluminum baking tins (approximately 6" x 9") from the grocery store and a pre-made pie crust and set forth to make my pumpkin pie. 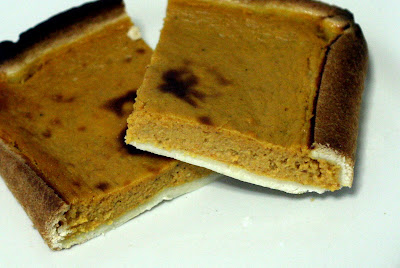 My first attempt at this turned out a bit on the charred side, but this was mostly superficial.  Beneath the super thin layer of crunchiness was a familiar texture and flavor - real pumpkin pie!  If you have a real oven and are not so adventurous as to give this a try in a toaster oven, be my guest (chicken).  You will have to adapt the baking times and temperatures accordingly (since I don't really have solid suggestions at this point either).