We spent some time in Germany a couple weeks back visiting some friends and had some amazing German meals.  One of my favorite dishes from Germany is spätzle, which is a type of egg pasta.  What is special about spätzle is that it doesn't really have a strictly defined shape, but rather its own shaping style.  This is hard to see if you buy the dried, mass-produced spätzle from the store, but if you watch a professional (e.g. a German grandmother - unfortunately I did not get to witness this, but Becky did), it will all make sense.  Spätzle isn't a "dry" dough pasta like that of many Italian styles, but rather more of a thick batter style.  If you have a spätzle making utility, you can use that to shape the noodles.  Otherwise I would suggest the German grandmother way of using a potato ricer. 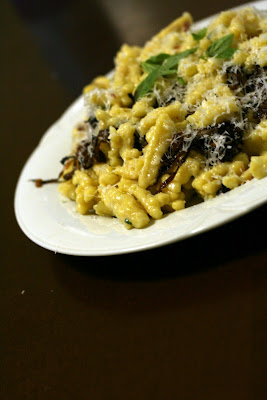 Porcini mushrooms are in season!  I've never personally cooked anything with them, but figured I'd give it a shot by starting simple.  Porcini have a lot of flavor when left alone, so I simply sautéed them in local extra virgin olive oil and enjoyed the fungus in its natural savoriness.  I cooked the chicken and veggies in the same pan for this dish - partly because we only have two pans (one huge, one tiny) and partly because it helps the flavors meld together.  If you like to separate the meats from the veggies, by all means use separate pans. 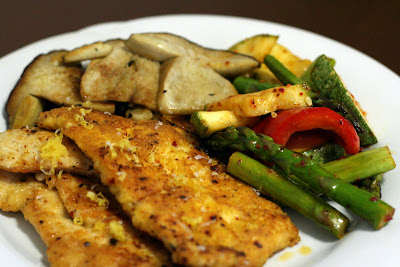