Eggplant was one of those foods that I would always pass over on restaurant menus and supermarkets alike.  It just never appealed to me for the longest time.  Then, one fateful day, I decided to try an eggplant Parmesan somewhere and have been a fan ever since.  I don't necessarily do a lot of cooking with it at this point, but I now know that, despite its less-than-savory name (even though I knew it didn't taste anything like eggs - which disgust me), it is a very versatile and tasty vegetable.  Bread it and fry it up with cheese and pasta just makes it that much more appealing!

This vegetarian meal can be made in less than an hour.  You can halve that if you use pre-made marinara sauce in place of the basic tomato sauce below. 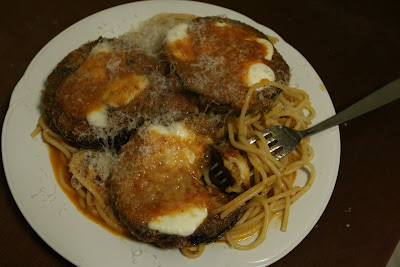